May 28th, 2016. A super final filled with expectations and hopes for optimal results by the young participants at Wing4students, the national competition in its second edition organised by Easy and supported by the Unipol Group.

In Bologna students from Universities, Technical High Schools and Business Schools, divided into teams, took part in a study program related to the English language, knowledge of which is indispensible today, aided by innovative American DynEd software. This way the youths were able to measure and enhance their skills and experiment team and individual work, while contending with peers from all over the peninsula. Some of them also took part in an optional video making challenge, creating promotional clips, strictly in English, based on the theme "Imagine yourselves in 10 years' time...what will your job be?".

At the beginning of the challenge in February there were 1'300 participants (30% more than the first edition in 2015) and they went through four exciting steps: the first a study phase, then the quarter finals, followed by the semi-finals and the final at CUBO Centro Unipol Bologna (The Unipol Group Centre) located in Bologna, Piazza Viera de Mello (fairgrounds district), a multi-functional, highly technological space, ready to welcome the 120 top competitors.

<< We are very satisfied with the success that Wing4students has had during this second edition in Italy. In fact we saw a significant increase of 30% in the number of participants - stated Antonio Lasi, the sole Director of Easy and the event promoter - The strength of the competition lies in the fact that those who work go forward in this challenge and even a beginner, a rookie learning the English language can reach the final. All it takes is the will to succeed and progress in the results achieved, through study and learning that we guarantee free of charge with DynEd software and online sessions with their tutors >>. 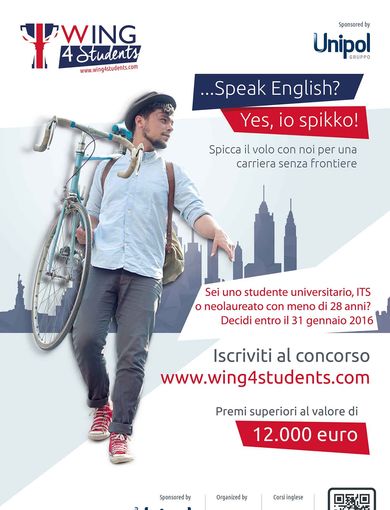