For the fourth consecutive year, UnipolSai Assicurazioni was the Official Partner of the Meeting for Friendship among Peoples, hold in Rimini from 19 to 25 August 2018, - at this year’s 39th edition entitled “The forces that move history are the same that make man happy”.

A great international event that has always brought to the fore the knowledge and the encounter of man with different cultures, religions, and experiences that will be debated and shared during the Meeting.

For UnipolSai, being Official Partner of the Rimini Meeting represents the continuation of a consistent path towards closeness to people and social responsibility. Also this year, the insurance company, with its project “In ascolto della bellezza” (i.e. engaging with beauty), aims to enhance the great contents of the proposed exhibitions, in particular by focusing on some projects and events scheduled in Room Neri.

Support to the Rimini Meeting stems from the awareness that corporations are called upon to create not only economic value for the benefit of shareholders, but also social value for a wide range of stakeholders, from government institutions to social assistance entities, from cultural associations to citizens. Therefore, “doing business” implies a great responsibility and the awareness that economic development should grow by also accompanying and supporting social and cultural progress, in the interest of the community. For UnipolSai Assicurazioni, the relationship between business and culture, between the financial sector and the social, cultural, and sports sector should become increasingly closer and more profitable for the benefit of future generations, who will be the real protagonists at the Rimini Meeting. 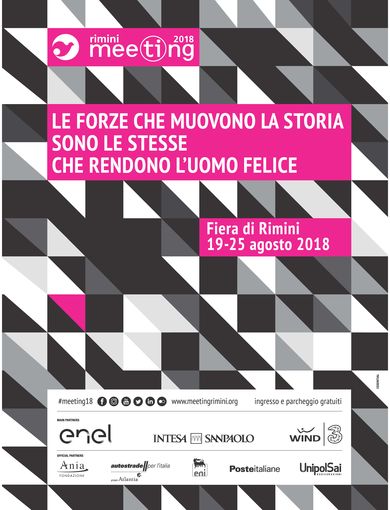