«Music, even the least expressive, even the most simple, generates restoration when it touches the soul for the first time. It elevates the soul or softens it according to the relative dispositions of either the soul or of the music. It immerses the listener in a confused abyss of innumerable and indefinite sensations».

This is the definition of music in words of one of the supreme bards, Giacomo Leopardi, who is celebrated - with the support of Unipol Group - in the latest Music Together Foundation event. This review, which began on October 18 consists of 4 appointments and is focused on the complete reading of one of Leopardi's most important poetic works: Canti, thirty-six compositions written during a lifespan.

The reading - entrusted to Giuseppe Cederna, one of the most affirmed cinema and theatre actors of our time - was accompanied by the music of Franz Schubert, who in turn is one of the pillars of European cultural history. Once again the stage was the Unipol Auditorium in Bologna, Via Stalingrado, already the theatre for two previous reviews: "Baudelaire: Fleurs du Mal" (2014) and "I want to be a composer: Pier Paolo Pasolini poet of sounds" (2015), hailed as an enormous success by the public. 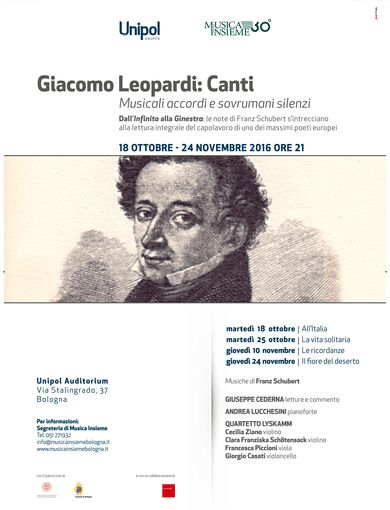